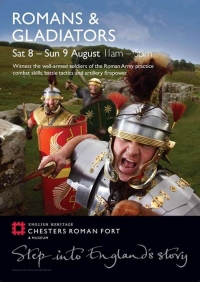 This summer holiday, join the armoured ranks of the world famous Ermine Street Guard in their 40th year of Roman re-enactment. Their soldiers will be depicting the Imperial Roman Army as they are put through their training.

Witness the colourful and well-armed Roman soldiers as they practice their combat skills, battle tactics and artillery firepower in a full scale battle with our Roman Gladiators.

Young visitors to Chesters Roman Fort can join in the drill and training with sessions throughout the day.

View the Archive of past Events

Information accurate to best of our knowledge.

"Very, very impressed with the hotel and staff"

"This is a place where the guests still matter"

"Fabulous service and food in this wonderful family hotel"

Some of our Awards