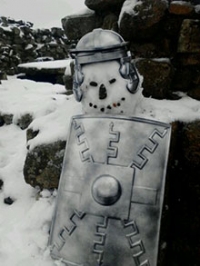 Join English Heritage's Curator of Roman Collections, Frances McIntosh, as she brings the story of the Roman festival, Saturnalia, to life.

Many of the festivities and customs of Saturnalia were absorbed into the Christian festival of the nativity of Christ. The Roman festivity which was held from 17 December - 23 December was a winter solstice festival to honour Saturn the god of seed sowing.

During two 15 minute talks, at 10.30am & 11.30am, Frances will uncover some of the traditions that may have stemmed from the Roman era and she'll identify what was truly unique to the Romans, such as the party when Lords became slaves and slaves became Lords for the day.

The sessions will be followed by any questions and answers you may have.

View the Archive of past Events

Information accurate to best of our knowledge.

"Very, very impressed with the hotel and staff"

"This is a place where the guests still matter"

"Fabulous service and food in this wonderful family hotel"

Some of our Awards